I have been inspired by a photo taken by the husband of a good writer friend Susi Holliday and titled simply 'Art'.

I was caught between the bright jovial display, that glitters with it's symmetry and synchronicity, contrasted with the content of what it displayed; a large amount of Diet Coke cans. The juxtaposition of such a commercial object, drunk in such quantity, with its controversial health risks (in my view anyway), being used in such an off the wall artist way, begged to be written about, or in this case 'Flashed' about.

So encouraged by my writer friend, that is what I did. Enjoy. 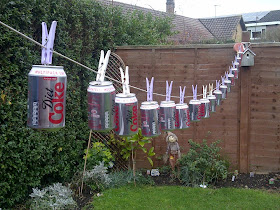 They said that it was the sugar in the coke that was the problem, but they were wrong. Plus it was diet anyway, so there was no sugar.

He counted out the white pegs to make sure he had enough. Then he measured the distance of the line, calculating the breaks between, before he started hanging them. It had to be right, otherwise it would look silly.

The cans glittered in the sunlight. The pegs just catching the top of the ring pulls, so they had room to move in the breeze. He smiled; she would have liked them, and she would have smiled. He faltered, his arm outstretched about to hang another one.

That was where it had begun, with her smile. It had started to decay - not metaphorically but literally.

He continued to hang them and turned them so that their labels displayed the same way. They had to be uniform. Then he took a count – there had to be an even number too.

As each tooth had crumbled, the dentist had grown increasing puzzled. He’d asked her to start listing what she ate. And when he first pointed out the regularity of the cola on the list, she thought it must have been the sugar and had switched to Diet. But then she’d broken her wrist. No accident, no fall, just a quick flick of the wrist to switch off the light and snap!

As he appreciated the contrast of the glaring red ‘Coke’ on the silver background, he remembered the blood test results, the words ‘advanced Osteoporosis’ ringing out and wandering round his head, trying to find a place.

He heard a crumpling sound from his hand and saw he’d dented the can he was holding. He threw it on the ground and picked up another; a clean, smooth one. He stroked it and hung it up, admiring its clean lines, its brightness, and the innocence with which it had held its poison.

It was then that they had heard about phosphates, and in particular Phosphoric Acid and its corrosive properties, particularly on bones. The funny thing was how dumb it was really; everyone knew about the coca cola tooth test, everyone had seen the pile of dust the tooth had become overnight. It was fact, not fiction. But they all kept drinking it.

He placed the last one at the end by the birdhouse. He didn’t think they would mind; birds liked sparkly things. He looked back along the row, looking closely at the gaps between making sure they looked equal, symmetrical.

Then he took the camera and stood back. She’d love it. He would lay it on her grave that afternoon.

So time for a taste of my new novel 'Sleep'.

It's proving quite hard to get into, as the way is not yet clear, but it's coming. Plus my writing time has been scuppered by work demands, so I have had less time to focus, and have fallen way behind with my NaNoWriMo word count.

But here's a piece to entice you:


As the van jolted forward with the light change, her mind jolted back to their first night in their new home together. They had decided to not move into either one of their existing homes, but to do this properly and move into a new place they had chosen together; a nice three bed semi.
They had settled in well, and found an easy rhythm. They created date nights and nights in together. Their first holiday abroad had been thrilling, both enjoying the same type of beach holidays; part lazing on the beach; part discovering the history of the Greek island they had picked. It had worked, they were in synch. So it had only been a matter of time until the next step.
It had been a long time since she had recalled any of the soft, gentler feelings she’d had towards him. She hadn’t dared; it hurt too much. And she’d been too consumed with rage. Now the rage was gone - she had quelled it.
Lizzy felt the van start to slow down, and saw the steps of the court house ahead through the windscreen. She saw all the people gathered there and wondered what they were there for. As the van pulled up she could hear the noise of them; their rage.
The guard raised his eyebrows at her and held up a blanket. She looked at him stone faced and then at the blanket. If nothing else it would protect her from the spit.
She stood up and lowered her head, and he swept it round her as the back doors opened. He clutched her shoulders helping her out, knowing she couldn’t step far with the ankle cuffs.
The roar increased as she stepped out, the blanket blocking her view of them. She felt relief from that, but knew the shuffle up the steps was going to be one of humiliation.
It was like walking through a lightening storm as the flashes went off left and right, streaking through the material of the blanket, heating up her face. When she reached the court house entrance she sensed a gathering of people behind her, and heard the warning voices of police telling people to keep their distance. Then the silence of the marble interior of the foyer deafened her as the doors were closed. Someone pulled the blanket off her head, leaving it to rest on her shoulders, and she saw her team of lawyers standing there waiting for her. Everything was hushed in here, and she was manoeuvred into one of the side rooms for the briefing.

For those that don't know, NaNoWriMo stands for National November Writing Month - where any and all aspiring, and already successful writers, attempt to write 50,000 words in a month. Many begin a new project, a new novel, but the idea is to just keep writing, no looking back, no editing - just write!

There is a website to sign up on and keep log of your word count, with a lovely little graph to show you whether you are on track, and there is also a forum and you can link to any friends you have who are also taking part - your 'buddies'.

This is my third attempt. Last year I only reached 20,000 words, but considering I had a work project running, it was really hard to keep on track. And although the same has happened this year too - a work project (maybe two) has started up alongside it - I have so far been able to stay on track and have breached over 11,000 words in just one week.

But this year I have a much larger support group, who are all writers of vary degrees, and whom I stay connected with through Twitter. We help motivate each other on a daily basis, in particular with what we call 'Word Mongering' sessions, where you go for 'writing sprints' on the hour or the half hour, and write for intervals of 30 minutes and see how many words you can achieve.

It was during one of these sessions that the idea to post a piece of your unedited work came from. So here I am to do exactly that. I am doing two projects for NaNoWriMo this year: finishing my novel Jade, and starting another novel Sleep.

I am down to the last couple of scenes of Jade, which is about an exclusive nightclub owner called Michael Nelson who has a secret, when that secret comes out all hell breaks lose both personally and professional. This scene is near the end, and is presently a favourite of mine (although it might need more work). So here it is, in all its unedited glory!


John looked at Kate and they both smiled. Kate said, “I don’t know what you said to her that night in the club when she went to talk to you, but you’ve earnt her undying respect! She’s changed her allegiance and been trying to get me to talk to you for a while now.”
“Really? I just put my foot down; wouldn’t put up with her drama, or screaming accusations. She just needed someone to be firm with her.”
Kate laughed. “People have tried that before, it had to be more than that.”
Michael shrugged. “I only insisted on how much I loved you. Told her I wanted to marry you. Could it have been that?’
Kate looked shocked. “You still want to marry me? And you told her that?”
“Yes, I do, and yes I did.”
Kate blushed.
“But this isn’t my official proposal. I think we should wait until I know if I’m of any use to you before making any kind of commitment. I have no idea what state I’m going to be in after this operation heals.” He grinned and she laughed.
“It’s not all about that and you know it!”
“I know, but it does matter.”
“Not to me.”
John interrupted. “Erm, hello? Have you two forgotten I’m still here?”
“No, not at all, you can bear witness to it.”
“Yes John, you can bear witness to the fact that I have just accepted Michael’s marriage proposal.”
Michael’s smile turned to one of elation. “Are you sure? I don’t want you rushing into anything; we need to do a lot of talking first.”
“I know that, but I don’t want to waste anymore time. These last few weeks have shown me one thing; I don’t want you out of my life. I loved who we were together and I want to find that again.”
Michael knew he couldn’t lean forward and kiss her, so he pulled her to him instead. This time he ignored the pain in his face and kissed her for a long time, a hand on each side of her face as he did so.  Only John clearing his throat finally stopped them.
“Sorry John, it had to be done.”
“I know, but it’s not nice feeling all green and hairy!”
They all laughed.