After a busy couple of weeks I am just scraping in my Visual Dare 8 entry, before the next one is announced. 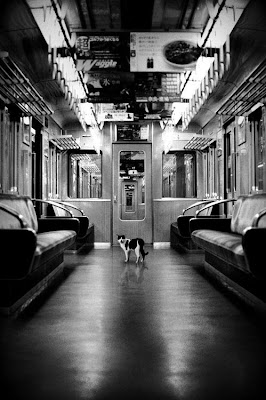 Calista sensed that she’d been here before, although maybe not in this form. With four feet she kept her balance well as the train rocked - or at least the illusion of a train; they’d made it too new and too empty, although the ceiling adverts were interesting.

Calista listened closely to the sound it made, waiting for the glitches between to indicate how far they were taking her. She wasn’t sure how long she could hold this form and she didn’t want to reveal her identity until she was inside and knew who was really in control here.

The train slowed and then jolted to a stop. Calista waited. She had counted twenty glitches, which was further than she’d been allowed before.


The doors slid open with a feint bing-bong. She looked out at the deserted platform and saw them coming. She was surprised; she had expected humanoids.

This week, the picture prompted a sequel to a previous flash piece:

She sat shivering, as much from the cold as from the shock of what they had done to her. Much like the bridge she had been used, abused and then discarded, left to rot, with her ripped clothing barely covering her bruised and broken body.


She huddled against a bare steal girder at one end, trying to find some kind of protection, or a sense of security from it, but none came; she felt exposed and fearful that they might return. She couldn’t face another round of them. It wasn’t so much the raping, it was the ways in which they insisted on humiliating her while doing it.

The original flash piece was written for the now defunct
Friday Picture Show, and earned an Honourable Mention :

She couldn’t look down, she was too terrified, and if it wasn’t for the sharp prod in her back she’d be paralysed too. She was thankful for the fog, which gave the illusion of ground just beneath the rope bridge and hid the distance across.

She trod onto the next wooden slat; it creaked and moved under her foot, making her pause. Another sharp prod; she could see the black rifle in her minds eye. She’d seen it when they’d caught her, and now she wondered what they were going to do with it when they reached the other side. 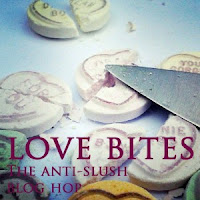 I was delighted to have been invited to enter a new Flash Fiction challenge in aid of Valentine's day, hosted by my fellow writing buddy and Nano Teammate Laura Jamez, called the Love Bites Blog Hop.  Interestingly, it's an 'Anti-Valentine's Day' theme. So a chance to air the darker thoughts on Valentine's Day.


Lissa threw her head back and laughed. The more she laughed the harder it became to stop; she clutched her middle and rocked back on the sofa, letting it out. It felt good initially, but then it changed. She felt the tears come and her breathing begin to hitch, along with a deep ache in her stomach that reflected the pain in her heart.

During this outburst Lissa kept a firm grip on the Valentine’s card that had sparked it, and as she calmed down she brought it into focus. Inside were the words he had penned thinking they would bring her back into the fold: “You’ve always been the only one for me.” The only one he kept returning to more like! The only one who’d have him! The other six had wised up!

She started tearing the heart shape into pieces; first into four, and then into tiny red, glittery bits. She watched them float to the floor, thinking ‘the heart isn’t just broken, it’s bleeding’. This sparked an idea. She smiled. Then she popped to the bathroom to check she still had one, and she did, new in the packet lying next to the adrenaline kit. She picked it up and turned it over in her hands.

He would drop by tonight, she knew that; rose in hand. What was it? An arrow through the heart? Well this might be a bit smaller, but that meant less detectable.


If you want to check out the other entries and leave a comment, click the link below:

A perfect prompt for me! And this is where it took me: 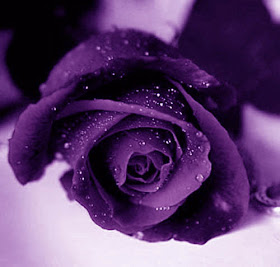 He stood there after everyone had gone, staring down into the open earth at the purple shrouded coffin. He sniffed at the purple rose he held, and looked at it for a moment before letting it drop to join the others that had been thrown in; a perfect sea of purple love to carry her on her way.

He shivered and pushed his hands into the pockets of his heavy overcoat, hunching into it, trying to escape the icy wind. It was then he felt the ring in his pocket and his fingers traced the gemstones, seeing it in his mind’s eye, remembering how it got there. A single tear hugged his cheek as he remembered the amethyst and diamond ring he had bought for her on their 10th anniversary, just two days before her terminal diagnosis.

Having missed out on number 5 due to traveling, I was determined to write something for the Visual Dare 6, so here it is. 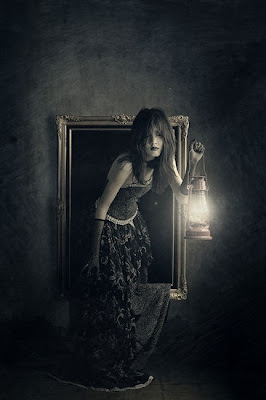 Belinda poked the wall with her finger and it wobbled.

She glanced over her shoulder to check if anyone else had seen it, then felt foolish. She knew she was alone in the house and had been for days.

Then she pressed her hand against the wall pushing it until it broke through and disappeared entirely. She paused, finding the sensation interesting, before putting her whole arm in. She wriggled her fingers on the other side and felt no resistance, so she took a deep breath and pushed her face against it, feeling the tight pressure of the surface tension on her cheeks before it broke.

Once she felt air on the other side she opened her eyes. The room was a mirror image, only on this side there were lots of people and they were all looking at her. As she emerged they suddenly rushed forward screaming, ‘No!’

This is where this week's prompt took me:

Arlene had to be very careful how she handled this, otherwise he’d take it the wrong way and then they’d all be in trouble. She couldn’t just deal with this in her usual way; she had to be far more tentative - more delicate, the delivery had to be just right.

If she said it wrong, and he snapped, they’d all lose out, and little Johnny most of all; he needed this home more than anyone; he need to be warm and dry, his health could not withstand them returning to the streets, his life depended on it. But Max was a hard man, and as he reminded her often enough that they weren’t his kids, so she had to do this subtly.

She looked at Arlette’s pretty face, with the tears running down it, and went over the words in her mind again, hoping she could get across to him that sexually abusing and raping her daughter was not on, and that there were other ways she was prepared to repay him for putting a roof over their heads, however degrading they were.