She had done it and although she was elated she knew the hard part was yet to come. She had to work out how she was going to get him up there to the summit; she knew it would involve dragging him, but with the air so thin up here it was going to take a while, and she was worried the next team would be arriving any minute.

She quickly took the tent down, and wrapped his cold body in it, ignoring his wide eyes and blue lips, only relishing the fact that she’d been able to finally do it and stop another night of torture, even up here.

It was the only reason she hadn’t protested about coming, apart from knowing he would have ignored her anyway, it was a chance to catch him in a weak position, because up here he was weaker than her thanks to all the nights of near asphyxiation he’d put her through for his weird pleasure; they meant she had a better capacity for surviving on little air, which he didn’t.

As she started to haul his body up the final pass, she kept herself going by reliving the surprised expression he had given her when she’d overpowered him and flipped him over, jamming HER arm up against HIS throat for a change, and digging her elbow in the base of his trachea like he always enjoyed doing;, then smiled to herself as she remembered how he’d struggled for air, and stopped suddenly when she’d asked him, “How does that feel for you, darling?” just like he always did.

On the 11th of March, it was my 11th year anniversary of living in Holland, and with all those 11's around I wanted to write something special.

I mentioned this to a writer friend, along with the fact that I'd recently written a 10 page piece, thus not quite matching the synchronicity. This prompted her to immediately challenge me to write the 11th page. And as always, if someone throws me a challenge, I have to take it!


So Rebekah Postupak here it is! 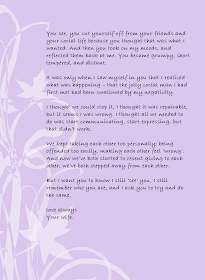 I'm a bit prompt with my Visual Dare 11 entry in on time this week, especially as I missed it last week. This picture took me somewhere else I didn't expect to go. 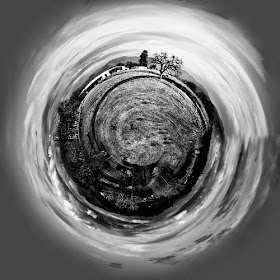 Alice cranked it up, twisting it round until it creaked. And then she let go, throwing her head back as the swing spun back round.

The clouds spun too, and as she lowered her head so did the houses. Her heart raced at the exhilaration it gave her, making her feel strong and as though she could do anything!

She would have to sit there and be on her best behaviour, while all the time being ignored by both of them. She would watch as her mother would fawn all over him, giving him everything he wanted, totally ignoring her. And then afterwards she would be given ‘the eyes’ when he wasn’t looking, telling her to Go! Disappear! Leave them alone! She wasn’t wanted anymore.

Adrienne sighed with relief to find herself here again; she hadn’t been sure she would be able to return to the same place – others had talked about a different one each time, so she was pleased to arrive here again.

This time she would enjoy it more; soak up as much as she could before the guilt set in and she had to click the back button. As Adrienne scanned the bookshelves she remembered the librarian’s words: “Don’t be too long, others need the space too, and at the moment, until we get more remotes, you have to be prudent with the amount of time you spend.”

Arh time, that was the very issue, for all of them; never enough in the day. And as she pulled one of her favourites off a shelf she smiled; thank goodness for mad professors and their tinkering, and finding a way to access these chinks in the space/time continuum.
Miranda Kate 3 comments:
Share

Bruno stifled a giggled when Meg whispered in is ear; he didn’t want to let on, letting the two footers know would be a bad thing. He stuck out his tongue instead, letting it pant out the laughter so they didn’t suspect. Meg hissed hers out, pretending to be his arch enemy – this caused him to pant again; the only thing she had arched was her back!

If they knew the real truth they’d shut them all up in cages, like those other animals he’d seen on that box shaped thing they called television - he’s seen how they test those that gave away their intelligence, it was horrible. It was best to pretend to be stupid; the two footers were right about one thing, ignorance was bliss!

Trying to get my Visual Dare 9 entry in on time this week. I liked this prompt, reminded me of the couple of times I've been to Venice. Always worth a visit. 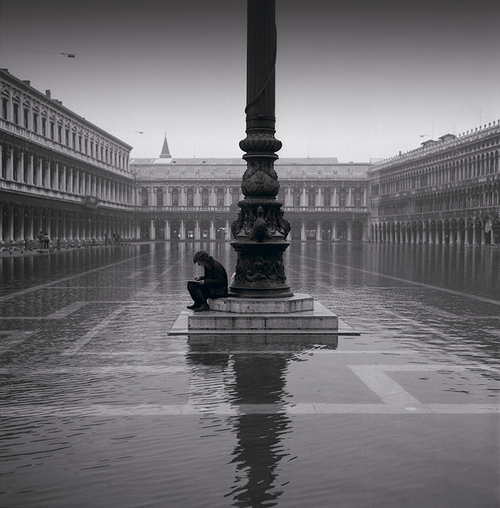 This is where this weeks photo took me:

Garth was relieved she was gone. He was also relieved that no one had been around to witness her outburst. St Mark’s Square was empty, all the tourists were hiding away from the rain – even the pigeon’s had gone.

He sat down at the base of one of the columns, and turned his face to the sky enjoying the sensation of the light rain on his face as he tried to forget the last words she had screamed.

He wasn’t useless he knew that, but he wasn’t the man he used to be either. He used to be a happy, fun person, but now he was quiet, even withdrawn; not daring to go out socialising, because it wasn’t worth the upset when he got home.

He shook his head, why was he putting up with this? This time if she wanted to leave he'd let her, he’d had enough!

He sat on the night bus and watched the last passenger disembark; now he was alone again.


He had fought the deep emptiness all day by surrounding himself by people and walking amongst the crowds at all his favourite landmarks in the city; the fountains at Trafalgar Square, Eros at Piccadilly Circus, Big Ben at Westminster - he’d even walked the length of the mall down to Buckingham Palace. But in some ways being in the company of anonymous strangers had made it worse, as he watched them in their pairs and groups, talking and laughing and enjoying each others company; he longed for that human interaction.


But now he was sitting on the bus alone, and he would go home and sit there alone too. He wondered when it would end, when the hole that her leaving had created would ever be filled again.