This week's picture prompt was taken by Lurie Belegurschi, an Icelandic photographer. He took this at Jokulsarlon Glacier (in southern part of Vatnajökull National Park in Iceland), of a Lenicular cloud formation.  He has some incredible shots on his website, definitely worth checking out.

I went sci-fi with this one. To me the photo called for it. 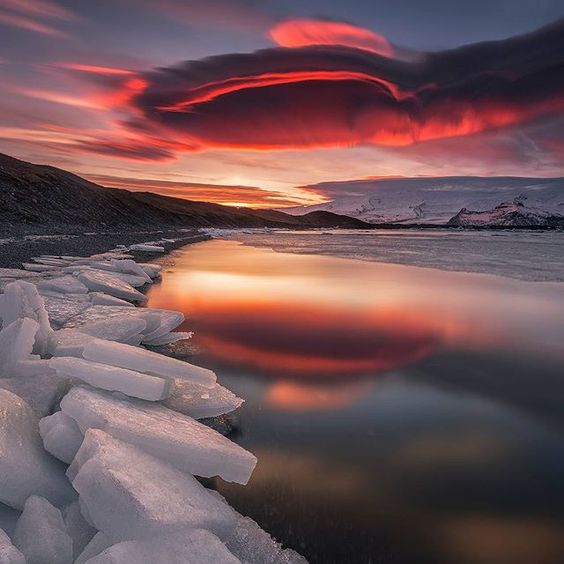 It hurt. The pain cut right into my bones. I couldn’t tell if it was the arrival or what I had landed on that was causing it. All I could see was white; everything around me was white. There was water, or fluid of some sort.

What was this feeling that was getting into every single part of my body and my bones? I turned my head and saw the sky, or at least what I thought was sky. It contained strange colours. I had always been taught that it would look blue.

It had strange shapes moving across it, or in it. I didn’t know what they were; they looked like I could touch them, like they were made of something soft.

The pain became apparent again. I turned onto my side and onto my knees and stood up. The ground beneath me cracked. What was this stuff? I touched it with my fingers. It was cold, so cold. Is that what was making me hurt?

I looked around. Behind the white there was black ground, it had a texture; rock of some sort. But the white persisted between, some soft and fluffy looking, some hard and cracking. Cold and water meant ice, or snow, according to my chemistry lessons. Was that what I was seeing?

‘Report.’ The speaker button on my jacket jolted me out of my thoughts.

‘Water,’ I said. I bent to touch it and brought it to my lips. ‘It contains salt. It must be ocean. And it’s cold here, so cold there is ice and snow, tons and tons of it.’

‘Life?’ The button echoed across the empty land.

I followed the edge of the water. The shapes in the sky had changed, as had the colour. A sun was beginning to become visible on the horizon. It was fascinating. I headed towards a mound of black rock, hoping to get more visuals on high ground. I reached the peak and saw something in the distance. It looked like geometric shapes of some sort – squares, but with lines that weren’t natural. Could it be a building? I’d read about those.

I headed towards it, but could see no forms of life. When I reached it, it had windows and a door, but it was empty. There had been life here, once, but how long ago?

I said, ‘Scan.’ A light appeared out of the button and streamed over the building, taking in every inch.

I whistled; that was a long time ago. It explained its derelict state.

‘There’s nothing more here. Shall I stay?’

‘No. Prepare for removal.’

I lay down on the hard floor and stared up into what they said would be a blue sky, but was more white, reflecting the desolate landscape. I saw a spec move across it at high speed. What was that? Then a rushing sound hit my ears. I sat up, putting my hands over my ears.

I saw pieces of debris nearby start to fly up as the loud noise continued to batter my ears.

‘Something is here.’ Something big hit the ground. I stood up. The noise reduced but didn’t stop. Then I saw them, running towards me. They looked like us but a different colour.

Then a pain hit my body and I fell backwards. I thought it was my removal; that they hadn’t had time to cancel. If you didn’t lie down it could hurt. But I was still there on the ground and I was leaking. My bodily fluid was running out of me as the creatures arrived, three of them standing at my feet and watching me.

The other kicked me in the foot. ‘Is it dead yet?’

I felt like I was drifting away. I whispered, ‘Removal, now.’

‘What did it say?’ the foot kicking one said.

‘Shall I shoot it again?’

‘Nah, leave it. It’ll be dead soon and we can drag it back.’

Then I felt it; my removal. Thank goodness.

When I opened my eyes again I was back home and people were healing me. My captain arrived at my side.

‘Still there and still hostile, I see.’

‘We’ll have to leave it another millennia then.’