This week's picture prompt was taken by Austrian photographer Ernst Haas. This is New York in 1952.

I went a bit Sci-fi with this one. Couldn't help it. 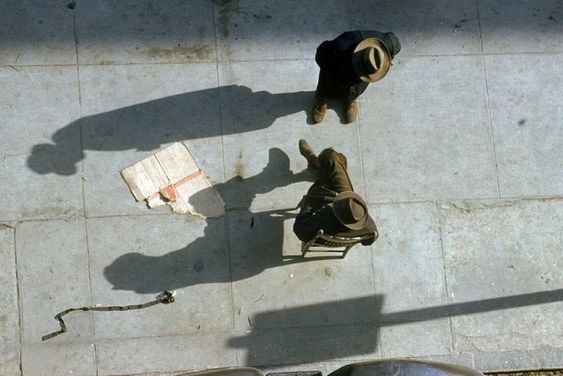 ‘And you’re sure they’re coming?’ The man standing kept looking to his left and right.

‘Yep.’ The seated man was much calmer.

‘Today, right now at this time?’

‘Relax will you, it’s all been confirmed.’

‘But I’ve not been through one of these before.’

This is the conversation that filtered up to me as I sat on the ledge of the open window having a cigarette. When I’d moved into the flat, people had said these backstreets were filled with men in suits having clandestine meetings, but up until now I hadn’t witnessed one. I wondered what it was about. Who were they meeting? What were they going to do?

I heard footsteps to the left, and the top of their hats turned in that direction.

‘Finally, you’re here. We’ve been waiting for an hour.’

Another suited man appeared also in a hat.

‘Sorry, I got held up. You know how difficult it can be.’

‘I know; we’re lucky we haven’t been seen yet.’

They paused, their heads moving as they looked around. I pulled my head back inside, so they couldn’t see me, and continued listening.

‘So are we going or what?’ The first standing man was nervous, it was clear in his voice.

‘Yes, just give me a minute to activate it.’

This got me peeking over the ledge again. What were they going to activate? The new arrival pulled a gadget out of his pocket. Too chunky for a gun, but he held it like one. Then a strange glow appeared, and formed into a ring in the air. I could hear it humming.

I watched as he put his leg into the lit ring and ducked his body through, pulling his other leg in, disappearing into the light. I sat mouth agape, mesmerised. Then the seated man stood up and did the same. Then the man holding the device looked around himself, turned the glowing circle round horizontally, and swooped it down over himself, winking out of existence.

I sat blinking at the now empty alleyway. I then looked at the cigarette in between my fingers. Johnny had given me these, had he laced them with something? I couldn’t be sure. But I would definitely be spending more time at my windowsill, and maybe, next time I’ll get one of those new Cinecameras, and record it. No one would believe it otherwise.