This image is from a Bookings.com website, advertising a holiday home called Bø Huset  in Bø, Sortland in the Vesterålen Region of Norway - Fjords country. The holiday house is hosted by Michelle Edelman, who I am assuming (until she responds to my email) is the person who took this stunning shot.

I had to go sci-fi with this one, although I complicated myself a bit and had to rewrite bits of it. 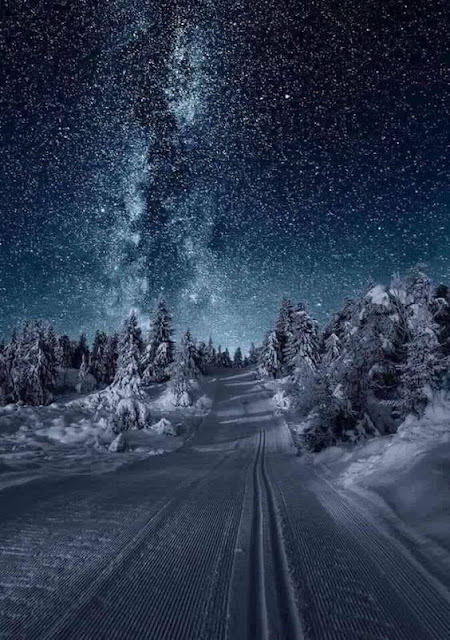 And in that moment, staring up at the infinite stars and the outer arm of the galaxy, he realised what he had missed. Burgen walked back to his truck, and pulled out his telescope, setting up in the snow covered road. He turned it to the right side of the Milky Way, and increased magnification as far as he could. Yep, just as he thought. He took a couple of snaps on his camera through the telescope lens. They’d be enough to pin point it back at the observatory, where he could look closer.

He put the telescope back into the truck and drove through the heavy snow until the little dome appeared at the top of the mountain. He could see a light on. Stellan was working late; on a night like this, who could blame him?

‘I’ve realised something.’ Burgen rushed over to one of the computer terminals and uploaded the photos, reimagining them over to the constellations and quadrants they already had in the system. ‘Come and look at these.’

Stellan’s eyebrows went up and he glided across to Burgen on the wheels of his office chair.

‘Notice these points, here, here and here.’ Burgen pointed to three distinct areas of stars they were familiar with and looked at many times.

‘Okay ...’ Stellan watched as Burgen increased the magnification, on each one, freezing it and bringing up the next on a screen next door. ‘Oh my god!’

‘I was taking a walk out tonight, you know with the clarity out there on crystalised nights like this, you can see so much more, and the pattern was just there, staring me in the face.’

‘But that must mean ...’ Stellan zoomed back over to his desk and brought up other areas of the cosmos, some within the milky way but most not. ‘These have it too! What does this mean?’

‘It means we can’t be what we think we are; we can’t be a planet sitting here in our solar system, an outlier on the edge of a spiral galaxy, that there’s some other kind of set up.’

‘I’m calling Siding, they’re awake, right?’ Stellan looked at the various clocks on the wall. ‘We need to see if they can see this too.’

‘I’ll contact Murchison to verify. It can’t be just us.’ Burgen began typing in a detailed email to explain what he was seeing.

Then Stellan stopped typing and turned to Burgen. ‘What if those quantum physics guys are right, after all? What if we are in some kind of simulation? This could prove it!’

‘It could. And what does that mean for space research and space travel?’

They stared at each other.

‘Maybe we should hold off from contacting others just now,’ Burgen said.

‘Maybe we should do some more research based on this anomaly and see where it leads us before we start ringing alarm bells,’ Stellan replied.

They nodded, their fervour temporarily halted.

‘But I’m going to keep checking through what we had, and maybe start looking at previous decades,’ said Burgen.

‘That’s a good idea. I’ll bring some of the other quandrants up too.’

‘This can be our special project.’ Burgen winked at Stellan. He laughed.

‘I’ll set up some parameters.’

The two of them continued in silence. They knew they’d hit something big. But they weren’t ready to share it just yet.