This week's picture prompt is by Silena Lambertini, an italian artist from Bologne. This is actually the second time I've used one of her images, back on Week 124 (Sept 2019) I used another. She named that one, but hasn't give a name for this one.

Another Tricky tale. She is so ready for me to brainstorm and write the next book. And I can't wait!  (Last Tricky Tale was on Week 194) 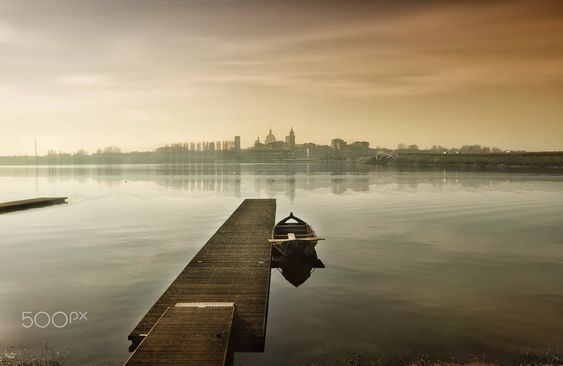 Tricky looked at the boatman through slitted eyes. He had a mucky face and a grin that did not reassure her. She didn’t fancy having to travel across the water alone with him, but she had no choice. It’s not as though she couldn’t defend herself, oh Tricky knew how to do that alright, and she’d leave him with sore balls for a week! But she hated being in this position: vulnerable to another. It didn’t suit her, not at all.

But she needed to get over there, to the big city. She needed to speak to Tumelo. He had to hear the truth face to face, from her lips, or he’d never believe it. Never! She could still hardly believe it herself.

She settled into the tiny boat, sitting at the back in the middle to keep it balanced. Thankfully the boatman kept to the other end as he began pulling on the oars and bringing them closer to the city skyline.

Chestwick was the landmass capital – if there was such a thing; it was where the baron resided and most of the population due to having the most buildings left after the shift. Each district had its own main town, but Chestwick was the hub. Tricky viewed the skyline as it approached, it still looked majestic but much was derelict. People had neither the time or interest in clearing it away unless it was an area they wanted to use. It had been picked clean over the centuries: materials recycled to create something new. The longest standing were the religious buildings, made of sturdier stuff and still worthy of aesthetic value, even though the beliefs that upheld them were long gone. People weren’t gullible like they were back then; things had to be seen, proven and tested for societies to take them on. It’s what made Tricky’s gifts difficult at times. People that didn’t experience the same tended to speak out against it, even if the reason was jealousy or spite.

Tricky shivered, less from the cold, more from what was ahead of her. Tumelo was an affable man but suffered no fools – he couldn’t be the baron if he did. It took integrity and intelligence, as well as the ability to handle those who were working against him. She admired him for that, but still her story wasn’t going to go down easy. If she could get it out. Tricky didn’t like this kind of responsibility; it made her skittish and want to run – and if she thought it’d helped the situation, she would. But she knew she was the only one he would listen to on this topic. It wasn’t every day you learned how badly you had been duped, and it needed to come from someone who wouldn’t revel in that humiliation. Oh she hoped she was right ...

There she went again, doubting. But every fibre of her being knew it to be true. She’d gone over it so many times she thought she might go doolally. It hadn’t been easy testing it, but each time it had held true. Telling the baron wasn’t optional it had to be done. No, this was not her idea of fun. Fun would be visiting one of those special ladies spas where she could get herself serviced, something she planned on doing while here. But telling Tumelo he’d been betrayed?

She shuddered again. The boatman gave her a peculiar look and she stared back, itching for him to try anything, if only to release this pent up stress. But he had the decency to look away and leave her to her thoughts.

She could see the details of the buildings along the shoreline now. Most were occupied. The lake had grown over the years, enabling more trade. They believed an underground spring was responsible, but no one knew for certain. The landscape of their world would change naturally and no one questioned or tried to control it. Nature was not to be controlled; the shift had taught them that.

The boatman pulled his boat up to a little jetty, identical to the one they’d left. He stepped out first and took her hand to help her out. She left a gemstone in his, as way of payment, and the smile she received made her wince. Some people weren’t graced with healthy teeth, or capable of caring for them. She would find another boatman to take her back when the time came – if the time came. She hoped Tumelo wouldn’t punish her for her news.

With a sigh and a shuffle as she tightened her coat round her, Tricky prepared herself for the noise and bustle of the city as she made her way to the baron’s residence. The sooner she got this over with the better.