This week's photoprompt was taken by @dbereton on twitter. This was taken in a hotel in Hammersmith, London.

I rather like it's dark foreboding feeling - lots of 'The Shining' feels. So with this one I went dark, and it's not for everyone, especially those with an arachnophobia. 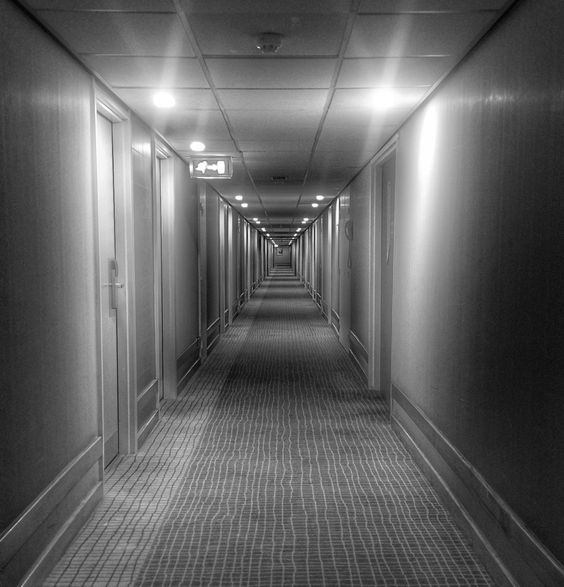 Lucid Screaming
She was here again, in the hotel corridor with all the doors. This time in black and white, that was new. Theresa sighed. Now what?

She’d tried all different ways to get out of this recurring dream – waking was the most elusive. She knew the exit signs to the stairs would only lead to other corridors and not out, which meant she had to open the doors. And they would open, but the question was to what?

She shuddered. They’d lead to scenes of carnage: bloody car accidents, gory train wrecks, trapped in burning buildings, lost or drowning in the sea, and once there was even a maniac with a chainsaw. The mind knew no bounds where her fears were concerned. She didn’t want to open them, but she had no choice if she wanted this dream to end. So here she was, lucid dreaming without the option of deciding what would happen next.

Theresa moved to the first door on the left and turned the handle, but it wouldn’t budge. Okay, that was new too. She move to the other side and tried the one there, the same thing.

She frowned. Maybe the exit door would lead to somewhere else in this dream. But when she opened it, she found an identical corridor, also in black and white. Okay, not then.

She moved on down the corridor checking the doors and still nothing opened. The distance ahead was the same as it had been at the beginning, as though she hadn’t travelled at all; the corridor was infinite.

Then there was a sound. She stopped and stood in the middle of the corridor, listening.

It was like rushing air of some sort. Had the air conditioning units in the hotel come on? She couldn’t feel a breeze. Was it blowing a gale outside – if there was an outside? She couldn’t work it out. And then there was another sound under it, a strange scratching sound that increased in volume.

Theresa stood frozen to the spot, her mind filling up with potential scenarios of what that could be, what was coming along the corridor – because something was coming, she was sure of it.

As the sound escalated so did her fear; her chest tightened and her breathing became shallow. She whipped her head back and forth between the identical views ahead and behind. Which way was it coming?

She saw movement at the corner of her eye as she was moving her head to look behind her. It was in front of her. But when she turned back she couldn’t see anything … or could she?

No, no it wasn’t. It was hundreds of little things.

She stared at the mass as it moved along the walls on both sides of the corridor coming towards her. She still couldn’t make out what it was; it had grown and the density of whatever it was made it look black. Were they spiders? Ants? Beetles?

The sound increased with their appearance, and it wasn’t just their scurrying that was making the noise; they were making some kind of chittering sound. What the hell were they?

But Theresa’s body refused to hang around to find out. She took a step back and then another, and then blind panic took over, and she turned and fled.

But the corridor behind was the same as the one in front; it didn’t matter how far she ran there was still more of it. And whatever the swarm was it had picked up speed as well, because it was just on the edge of her peripheral vision keeping pace with her.

It was going to catch her, overwhelm her; do whatever it wanted to do to her. She had no choice, not in this corridor.

She could feel them at her heels.

She could even feel them on her skin.

She opened her mouth to scream, but they were there, filling it.

Theresa sat bold upright in her bed, clawing at her throat, her scream turning to a cough, and a big fat spider that had crawled into her mouth while she slept, shot out onto the duvet in front of her and scurried away.