This week's picture prompt is by artist Dan Luvisi over on Deviant Art. He made this for his science fiction book, Last Man Standing: Killbook of a Bounty Hunter - this is the character Hex. I initially only found a picture of the head of this saved, and it is all over the internet as wallpaper with all the colours enhanced, but when I found the entire original, I much preferred it as it offers so much more. Plus, crediting is SO necessary, so that the artist gets recognised and in this case, a fellow writer gets referenced. Sadly it looks like the book is out of print otherwise I would have bought a copy.

More an opening than a complete piece, and maybe one I will revisit. Not easy to fit so much worldbuilding into a short piece and keep the story moving. 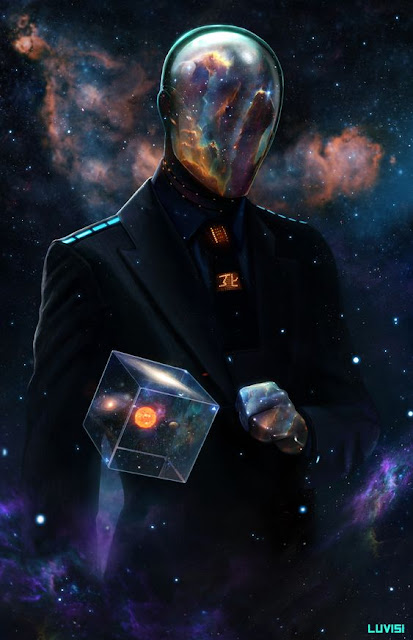 Parker loved the anonymity of the new helmet, its one way mirrored effect and oil swirl design. It gave him a second level of security; it not only protected him from the viruses, it kept him safe from those he didn’t want seeing him. He particularly liked it as evening wear.

Partying had become a political affair during the stream of pandemics that had quite literally plagued the early 2020s. The extreme measure in the 2040s to finally bring an end to viruses by banning all social activity had changed the landscape of entertainment. Some had likened it to the prohibition days in America more than a century before, but the enforcement of the new laws had taken it to another level.

Buildings that had housed pubs, cafes and restaurants had been bulldozed or repurposed to provide small, self-contained units for people on low or no income to keep them off the streets and curtail the spread of disease through homelessness. Shopping in person had been banned; everything had to be done online. Shopping centres and shopping malls were turned over to distribution and postal outlets. While sports, music and theatres had taken the hardest hit of all with redevelopment of theatres, stadiums and arenas, repurposing them into housing, distribution depots and call-centres, as well as film studios to provide for the ever growing streaming industry that was now the key form of entertainment for the populace – and the only place where a gathering of people was permitted.

Parker had been born at the tail end of that period in the early 2050s, when they were just beginning to realise that socialising was a necessary evil if the human race was to survive. It had followed a bleak period when death by suicide had been higher than that of the Coronas.

His parents had been part of the entertainment industry which had allowed him an easy entry into a great career option. Acting had come naturally to Parker, and he’d grown up surrounded by famous peers all able to engage in a physical sense unlike the general public. It had given them elite status but had been resented by the people.

And now into the late 2070s, it had also sparked the debate about the return of social venues, being that a few had popped up under the ownership of Parker and his work colleagues. The governing bodies had tolerated them while keeping check on infection numbers, and so now there was talk of more being set up.

Parker thought it was only fair, but it meant going out among the public, something he’d not experienced before, and scared him, especially when there were people who begrudged his existence.

So this new design in headgear was exactly what he needed, and it went perfectly with the special gift he’d bought Finola. He really hoped she would like it. The new found interest in space since the landings on Mars had provided a wide variety of these pretty little 3D gadgets. The projection of swirling planets inside was mesmerising – or so he hoped she would think when he gave it to her.

He was nervous. He’d never given a girl a gift before; he’d never had a relationship get this far. They might share a unit and live their lives together, as those working in virus free bubbles had to do, but this was taking it a step further; this was buying her something personal. It meant he wanted them to become something more.

He straightened the LEDs on his tie and admired the ensemble. Tonight was the night. He could feel it. He hoped she would too.