This week's picture prompt was taken by Thomas Pluck, the author of The Boy from County Hell. Thomas said this image was taken in Winslow, New Jersey, across the road from the blue hole where the Jersey Devil was purportedly seen bathing. (Folklore)

Another picture that lends itself to Tricky's endeavours. The last one was just last week, on Week 240. 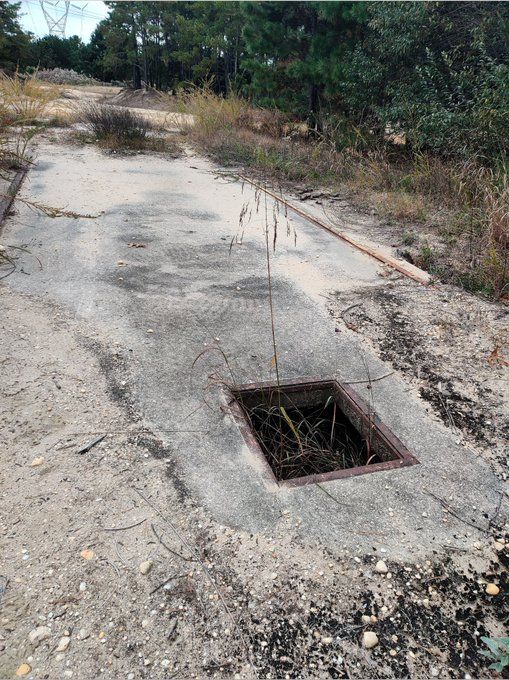 Going Underground
Tricky considered the hole. It had to lead down to the underground bunkers, where else would it go? But it didn’t look like the others; there was no door on it, and there were plants growing out of it. Although plants grew out of everything that had been left to ruin – and a lot had been left to ruin since the shift. But plants weren’t fussy. If there was light and water they had all they needed. They didn’t fuss about locations or safety; they weren’t as fragile as humans. They were flexible and persistent.

Tricky reached out her energy and felt the faint, delicate strands of the plants. They weren’t strong here; there wasn’t that much sustenance down below. That would suggest tunnels.

Tricky had to stop dallying and get her prissy little resistant arse down into it and find out if it was what she sought. She secretly hoped it might be an old sewer – not that she liked the idea of being in the stench of decaying shit, but it meant she could procrastinate a while longer if it wasn’t to the underground tunnels that housed Stanislav’s network. She wanted to orientate herself before coming face to face with any of them. You had to work out where the backdoor was before you went in the front door.

She took a breath and gripped the jade in her pocket. She felt the brilliant green energy engulf her and sighed her relief. At least she had some kind of warning system in place.

She sat down on the edge of the hole and swung her legs in. She couldn’t see the bottom for the plants, but trusted it wouldn’t be far. She gently lowered herself in and found the bottom at just under shoulder height. She squatted down and rummaged in her skirts, looking for the torch she had tucked away.

They might have lost some things from before the shift, but making batteries wasn’t one of them – or processing power in general. Solar and wind were abundant on the landmass, and they’d developed interesting and cheap ways to harness it. Batteries were cruder than they used to be, but were still sealed and able to be used in the small portable devices that housed the tiny, bright LED lights. All the parts were still made, but not in mass quantities. It wasn’t necessary to make more than was needed, that was just wasteful.

She flashed it up both ways and saw nothing but a narrow tunnel. She crouched low and travelled to her right, until the light reflected a wall of rubble; a cave in. She went back on herself and kept on going. Her back was starting to ache bending in such a way, when it came to an end and opened out into some kind of junction. Tricky stood looking at the three tunnels leading off the one she had come along. This would be the quickest way to get lost, especially if there were more of these junctions.

Tricky wasn’t claustrophobic by nature, but the thought of being stuck down here in the darkness made her shiver. There were no trees or plants here strong enough to lend her support; she only had her own energy to rely on and it could run out in these concrete chambers. She could leave a trail of gemstones though; she had plenty of those with her. She took out a garnet, placing it on the ground at the entrance of the tunnel she had come down. She slowly went round each of the other entrances and stood listening, not just with her ears but with her very being. And that’s when she heard it. It was travelling down the tunnel opposite the one she had arrived through, a vibration she had experienced before, the night of her mother’s death.

A glow appeared, cutting through the torch light, but it wasn’t coming from the vibration, it was coming from her skirt pocket. Tricky pulled out the jade and the green light it gave off lit her surroundings, lending it an eerie gleam that did nothing to calm her.

Her mother’s energy was responding to that vibration, but was it a warning, or should she investigate further? Would this tunnel lead to the nerve centre she sought? Tricky hesitated, hating her uncertainty which was born of reluctance – although she’d never pretended to be brave and courageous, oh no, Tricky didn’t go in for any of that guff. There was nothing wrong with running the other way, sometimes it was the sensible thing to do. But in this case it wouldn’t get her anywhere, and she needed to get somewhere – she needed to get to their lair, hopefully by hidden means. She took a deep breath and started up the tunnel.