This week's picture prompt is by British artist Pauline Jones. She call's it 'With a soft thud'. She has some really interesting art. Worth checking out.

I wasn't sure where this one was going, but it went all Sci-fi 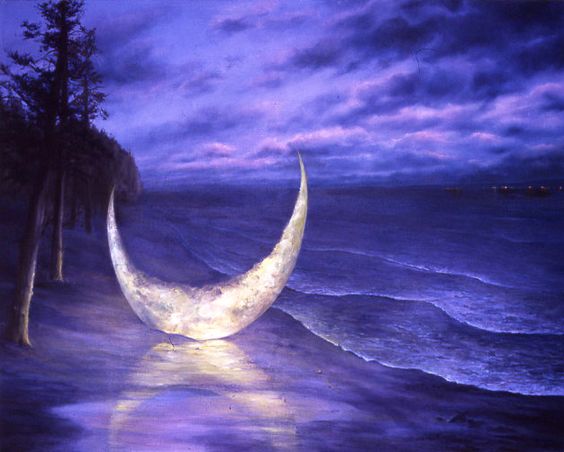 Moonbeams
Phila hadn’t seen anything like it. The sonic boom had been heard across the island, but the glow had frightened them more. When they crept out of the trees to see what it was they discovered a piece of the moon.

How could it fall from the sky and why did it still glow? They’d been taught the sun was what lit the moon. Or were they mistaking it for the moon because of its shape?

Phila had been the first to walk up to it. She knew she would be leader one day and showing her strength now during this moment of crisis was important. She felt the power of the light on her skin. It seeped into her and lifted her mood. She reached out her fingers and they disappeared into the light, eventually resting on something solid. She could feel the light strumming through every sinew of her body.

She heard gasps from the tribe and looked round to find them on the ground below. She was up in the air, held in a moonbeam. But she didn’t panic; she felt totally calm.

Then she realised she was higher still as she could see their entire island and even the ring of reef that protected them from the high seas. Then she saw the curve of the ocean and the stars above as she ascended. She still felt no fear, sure that she would be okay.

She could still breathe even though the planet was reducing in size below her. Where was she going to?

She turned her body round, turning her back on her home and there it was: the moon. They’d lived their lives by its cycles and prayed to it for generations and here it was growing larger and larger.

It glowed too, like the slither that had landed on the beach. Under the surface light emanated. As the planet filled Phila’s vision, clusters of lights became visible and structures. There was life here.

She drew closer and closer, taking in the landmasses, until she was over just one, an island like her own. She began to see the tops of trees and people gathered on a shoreline of a sparkling sea. They looked up at her in awe as she began to descend towards them. When she landed they moved towards her encircling her. She smiled at them, and then recognised they were her tribe. How could that be?

She looked around and saw the crescent of rock that had landed next to her, but it no longer glowed. Instead she did. Her body gave off the light she had been consumed by moments ago. People were reaching out to touch her, and when they did they fell to their feet and bowed.

What had happened? Had she become a God?

The moment the thought occurred, her mind was filled with all she had to know and do. She saw their future in her mind’s eye and it wasn’t this place. In fact they needed to leave their home here on this island and on this planet to find a safe haven above. It was the only way they would survive what was coming as their planet fought to regain its health and purge itself of its parasitical infection.

Phila knew the destination and the means. She called to them to gather everyone. They needed to leave immediately.

The frenzy that took place as her people put their trust in her filled her with love, which in turn expanded the light emanating from her. Once they were gathered she reached out her hand to the one closest and told them to all link hands together so they were one unit reaching back into the woods behind the beach.

She turned and placed her other hand on the rock, and as before she was lifted up and taken away from their island, except this time she was not alone, they were all with her. And this time when she arrived in the moon’s periphery she saw the world she’d glimpsed earlier, but as she descended it no longer resembled her own.

The structures she had seen opened up to an underground world, hidden from view, yet all aglow like herself, as were the people – their people, the rest of their tribe, one they had once been a part of but had splintered off and fallen to earth like the crescent that had fallen to fetch them. They were home and safe.