This week's picture prompt was taken by Walter Arnold an American photographer. He calls this one The Pull. It was taken in Salpelo Island, off the coast of the state of Georgia, in the US. This is not the first time his work has been a prompt on Mid-Week Flash, the last time was Week 177, back in December 2020. He takes some wonderful pictures, worth checking out.

A short piece of what I saw when I first looked at this image. 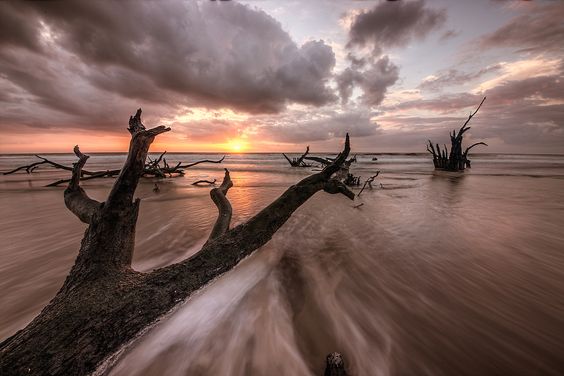 He gripped the log, having managed to straddle the main limb, and held on for dear life as it was pulled away with the hard tidal water. He knew that it would be pushed back just as strong but he had no choice but to hang on if he wanted to stay alive.

Not one inch of this tiny little island stayed dry during the ocean tide anymore. As the sand had been dragged away so had most of the vegetation, in particular the large trees that had once kept it shaded and allowed other plants to grow.

Perry didn’t know what had brought about the change in the seasonal rotation of the sea. In the three years since he had been stranded on it, he’d mapped the weather and the tides, trying to work out the possibilities of getting off. But four months ago the first of the exceptionally high tides had started, bringing daily floods and washing away his rustic attempt at shelter. The persistent water had started to corrode the bases of the trees, the salt permeating the bark, poisoning them, making them easier to breakdown and drag away.

He scanned the sea, hoping to see any kind of boat or ship on the horizon but there was nothing, as it had been all the years he’d been stuck here; dropped by a malfunctioning plane which had sunk to a watery grave along with its pilot.

Perry considered this could be likened to a rollercoaster ride, like he used to enjoy back home – being thrown back and forth, the water rushing along with the dead tree trunk. But the chances of him losing his life back then were minimal, today they were very real. And even if he did survive this ride, then what? How much longer before he’d died from thirst or hunger? Rains weren’t due for another week or so, if they came, and if they did he had no way to catch the water or keep it. Maybe he’d be better off letting the ocean take him.

But instinct and the innate desire to live held him on the trunk as the movement started to slow and the waters began to recede, the trunk being shoved back into the sand. A respite of a couple of hours before it started again. He wondered if next time the sea might take the trunk once and for all, and him along with it. Part of him could only hope.