This week's picture, according to all the sources I can find, say this was created by Adam Gaia, who I have found on an art website, but this image doesn't appear. The Instagram account the art website gives also doesn't exist anymore. Shame. Hope it is theirs - but can't find it associated with anyone else.

Went a bit esoterical this week. 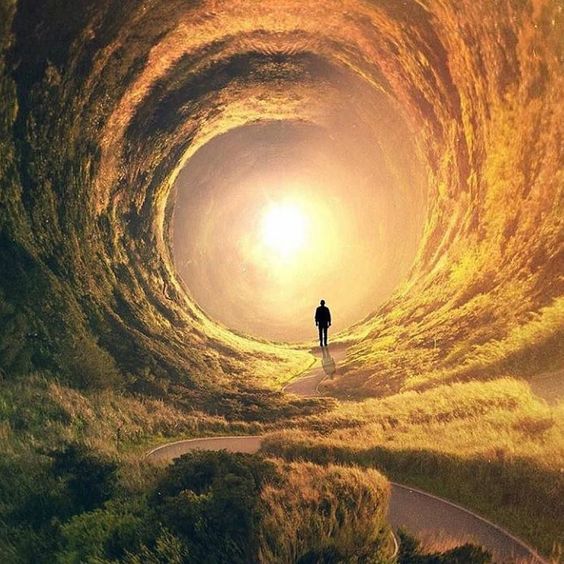 The Light
Tim was terrified. He had no way of knowing if he was going the right way. The path might be clear, but should he be on it? It wound through the grasslands which surrounded him in all directions. There was no other path or direction. This was it – which in fact it was … or at least he thought it had been. He’d died, he was sure he had, yet this felt real, tangible. He could feel a breeze, hear wind through the grass, smell the grass. He bent down; touch the grass. So if he wasn’t dead, where was he?

He refused to entertain the idea of heaven. He’d never believed in that concept, spurned it all his life. He had pondered the afterlife, but this wasn’t life, this was a path. But to where? Would St Peter and some gates come into view shortly? He chuckled to himself. But yet he wondered if he should. What if that was where he was headed? At this point he couldn’t rule out anything.

The way ahead seemed to narrow, or at least it felt like it did. Tim couldn’t trust his eyes anymore – or any part of his body, because it wasn’t really there. It was residual; in his mind’s eye only.

He began to feel like the path was leading him through a tunnel, the grasslands wrapping round him to the left and right and overhead. There was a light ahead. Oh good grief, was this THE light? The one you were meant to go through to ‘go over to the other side’? Surely that was just humans and their hopeful bullshit. There was no other side, or light. But that was exactly what was ahead of him.

The light glowed, and basked the grasslands in a golden light. It was magical. Tim mentally scoffed at the word, but it was the only way to describe it. It shone like light he’d never seen before, and it enveloped him. He looked down at what was once his body. It hadn’t been his body before his death, it was his body from his youth; how he always remembered himself. Even though the clothing was dark, it glowed and sparkled. He could only smile.

He felt elated. He had no reason to be elated – he’d just died, but there was an excitement in the light that was infectious. He felt his stride quicken and he rushed forward. The light seemed like a destination. The path seemed to disappear out of sight. Tim wondered if there was an edge, and if he might fall or jump or step through into something. He wanted to know what. He felt eager, like a child before an exciting event, restless: curious and a little nervous.

Was he going to see family? People he’d known who had passed? His mind raced at the thought of who he might see, and he considered the past relationships he’d had, some of whom had already passed. Would any of them show up? Would he want them to? Or was it all a fallacy that you met your loved ones? Maybe there were no people.

The light filled his entire vision as he approached it and he knew that at any moment he would cross over into it, but the path kept on going and he kept on walking, and it remained there in front of him. His excitement didn’t fade, it matured into a keen knowing that he was about to witness something that would explain it all, the very existence of life; that he was on the verge of knowing everything.