This weeks picture prompt is by Igor Zenin a Moldovian photographer. This one is simply called Winter Landscape. This is actually the fourth time I have used one of his pictures for Mid-Week Flash, the other were on Week 175  Week 10 & Week 97 He has some great art pieces.

I had to do a rewrite to get this to come out as planned. It's a dark one, but I think it works. I've gone over the word count, but I'm not sure anyone cares. 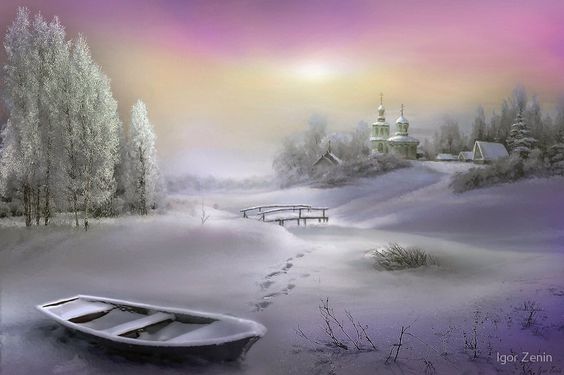 Evacuated
Fagan crept up to a tree and peered round it. All was quiet in the valley, the snow making it soundless. He saw tracks leading from the boat into the town.

He stepped out from the cover of the trees, risking exposure as he scurried up to inspect them. There were four sets of boot prints. He followed the trail over the bridge into town.

He kept close to the wall at house on the corner so as not to be spotted. What were they doing here? The town had been evacuated weeks ago. Maybe they didn’t know.

Fagan skulked further in, following their tracks. They’d gone straight to the town hall. They hadn’t bothered checking any of the other buildings. They knew the people were gone, so why were they here?

He ran down the side of the building rather than follow them in. It had been left unlocked as had all the buildings. He reached the side entrance and carefully opened it, sliding in as soon as the opening was wide enough.

He took the back stairs up to the main floor as silently as he could, listening out for them. When he reached the door into the main foyer, he stood with his back against the wall next to it, listening.

‘They’re not here; they’ve taken them with them.’

‘Well there’s nothing here. So what do we do?’

‘We can’t go back without them, he’ll kill us.’

‘Don’t be silly, they were just being hysterical. There’s no one here. It’s completely quiet.’

‘Too quiet if you ask me. It doesn’t feel right.’

‘Come on, there’s another level to this place.’

Fagan heard them stomp up the stairs to the attic where the town memorabilia was kept. He couldn’t work out what they wanted; there was nothing of value here. After a few minutes of scuffling sounds overhead, he heard them coming back down.

‘They could be in the church. He said the centre of the community; maybe we’ve got the wrong place.’

‘Bit sacrilegious to ransack a church, isn’t it?’

‘What you getting all religious on us now?’

‘And you think stealing from here would be?’

‘You’re a funny sod, no one’s eyes are on us, the town’s dead. Can’t you see that? They’ve been evacuated.’

‘Yeah, and why exactly is that, Clancy?’

‘It’s all a load of guff, there’s no psychopath on the loose. I think it’s something he arranged to get them out so we could come in and retrieve the stones.’

Fagan grinned. Their naivety would benefit him.

‘Why couldn’t he have come himself? He knows where they are and what they look like.’

‘How do we know he’s not sending us to our death?’

There was silence for a moment.

‘Don’t be so bloody stupid, why would he do that?’

‘Maybe because he’s the psychopath!’

‘Don’t talk about him like that. He’s served us well. Come on, let’s go to the church.’

Fagan silently backtracked out of the building, while they went out the front, heading to the church. Fagan took another route round the back, using the side vestibule entrance. The pastor hadn’t wanted to leave but there hadn’t been much choice in the matter. Too many had died.

Fagan climbed up the stairs to the bell tower. He reached up inside the bell and found the little sack hanging from the bell clapper. This was what they had been sent to fetch. They were pretty gemstones and would fetch a good price, but Fagan had no interest in riches.

He quietly made his way down to the gallery. He could hear them below, their inane chatter bouncing off the walls as they looked around for the stones. Fagan moved down to ground level and past the door, carefully locking it as he went by. He crept up the aisle on the left, towards the altar, keeping out of sight.

‘Thought I heard something?’

Fagan found himself grinning again. He loved how people dismissed their instincts when they were in danger. This time when he moved he deliberately scuffed his feet. All four of the men froze, eyeing each other in terror. He wanted to laugh but would hold off a bit longer. Instead he chucked the little bag of gemstones onto the alter table.

They all drew their weapons as they scanned the church, still unable to spot him. While their backs were turned, he rushed across to the altar and crouched behind it.

‘There’s someone here. Oi, mate! There’s no point hiding. Show yourself & we can talk.’

Fagan had no plans to talk, only plans to sacrifice.

He rushed them, killing two before they turned; stabbing one through the back into his heart, and another with a swift swipe across the neck. His blade had never been sharper. The other two tried to swing at him, but they were clumsy and he dispatched them without even breaking a sweat.

All four lay on the church altar. Perfect. He’d say his prayers then prepare them for the spit. He’d have a feast and pay thanks tonight.