Today's picture prompt was created by Norwegian artist Erlend Monk. He has a few of these, and many images I find intriguing. I might just have to return to use more.

I wanted to capture what I felt when I saw this image. I think I managed it with this tale. Yes, it's dark, be warned.


The General Guidelines can be found here. 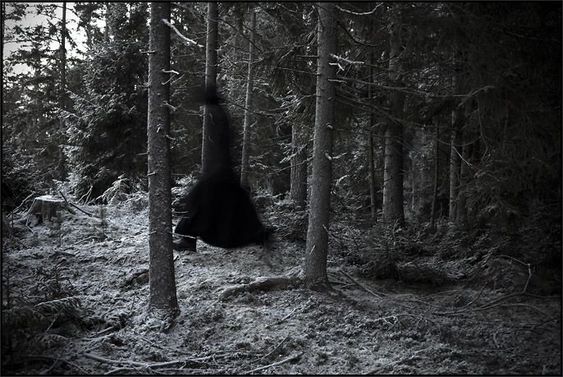 As the picture developed in the liquid I could see the outline of an image. One of my hidden motion cameras had picked up something.

As it came into focus it looked like a person, but it was blurred, caught in the midst of what looked like running. It had to be moving pretty quick to be out of focus though; this particular camera was one of my fastest at 1/1600sec.

I took the image out of the fluid and used my photo magnifier to get a closer look. Yes, it was definitely human. What was it doing?

Since Susie had gone missing in the woods I’d been keeping watch, convinced she must have been taken. There were long standing rumours about something in the woods, and it was supported by the evidence of people disappearing. But until this point no one had actually done anything, which is why I’d set up the cameras.

There was no definition of features, so I started developing the next few photos in the reel. There were several more as it moved out of shot, and then it moving across the front of the camera again, this time closer. If I put them together I might have a sort of time-lapse film of their movements. That gave me an idea.

I took the reel of negatives over to a slide machine and fed them in. I’d been working with film so long it only took a matter of minutes. I prepped the room so the light from the machine wouldn’t disturb the rest developing and turned it to the wall, switching it on.

I used the remote clicker to move through the images, watching the blurred figure move one way and then the other across the screen. The image moved closer to the camera each time it crossed. The features were still out of focus but they became more apparent as the distance was shortened.

There was an outline of a face. It looked pale, which could have been the light in the wood, but the ears were strange: sharp tips poking out either side of a wide brimmed hat. Its nose seemed stunted somehow, just black nostrils like too holes above the mouth. But I couldn’t quite see the eyes, each time they seemed to blur across the side of the head.

I stepped closer to the screen, as though that would help, but just as it came so close I thought it might hit the camera, it vanished.

I clicked through; nothing, just the woods, no figure.

Then the images seemed to grow dark, which was odd seeing as they were created through mid to late morning. They faded at the edges, the darkness spreading across the lens.

I clicked a few more times, running through possible scenarios in my head that would cause the camera to blackout. Then two dots appeared in one image and grew as I clicked on.

A sensation started at the back of my neck and ran down my spine, like someone had trickled water down my back. I could see the hairs on my arms raise in the light from the screen as each click exposed what I was seeing. It settled in my stomach as a mix of dread and excitement when I paused, knowing the next image would be the reveal.

I pressed the button down slowly and deliberately and there it was: a creature.

Its eyes were small orbs of white with tiny pin prinks of black in the centre. The face was grey, except the nostrils which were black oval holes. The ears, as I had suspected were long points on either side of the round head, but it was the lipless mouth that drew my eyes, with its row of sharp teeth.

My breath caught but my finger seemed to run on automatic continuing to depress the button.

The face pulled back slightly, the teeth spreading as it grinned. I could see bumps at the edge that indicated fingers. It had hold of the camera.

Then each image was a rushed blur, much like the movement of the creature earlier, until it refocused in some kind of underground room.

My stomach churned as debris on the floor came into view, my hand dropping from the clicker to my mouth as the final image gave a clear shot of the limbs and pieces of body.

I knew more than I wanted about what had happened to Susie.