This weeks photo prompt is of a bookstore/library in Yangzhou, eastern China, taken by photographer Shao Feng. It is actually a small shop, but the angle and the mirrored floor gives it a different perspective.

I wasn't sure where this would go but I liked it, and although I have said this many times, I think this might actually be a story I could expand on here, it's definitely got a future in it. 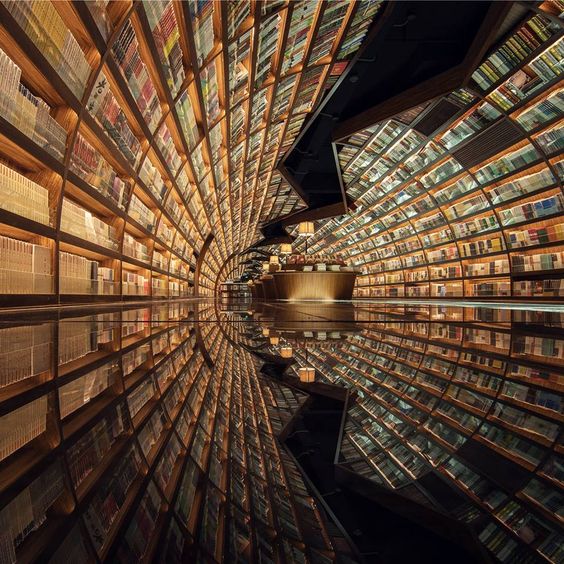 I ran my fingers over the rows and rows of book spines, marveling at what the fissure had uncovered. We could never have imagined there was such knowledge available to us; we thought it had died along with the earth.

‘Books,’ I sounded the word out; it was a new word, one of a collection that was expanding with this discovery. A few of us had grasped the process of reading fairly quickly, and were teaching the rest, but it was slow going.

People were used to visual living through the world of fantasy games, which only required vocalization or clicking on pictures. The art of reading had been lost along with all the books in the fires and storms that had been the ending of surface living. The computers, along with the remaining people, had moved underground and survived there.

The only reading now was done through coding and that was all numbers. The number literate were the bosses and lived as such.

But the latest round of earth shocks had revealed this untouched room, full of perfectly preserved books. (I reveled in the sound of the word; they were things of perfection).

Besides learning the words and their intended meaning, there was debate about the content: how factual was it?

It was difficult to imagine that what most of them held could have been real. Did people go on those kinds of killing sprees? It was difficult to imagine some of the murderous scenes, or the intelligence of criminals portrayed in some of them. Did lives really twist and turn like that? Had elves and dwarfs really existed? Maybe some of the creatures in the fantasy games were based off them. Had there really been intergalactic space travel? Were there other civilisations out there we didn’t know about? Could we contact them?

And then the wealth of relationship matter: did everyone write about their love lives? Was that the fashion? It was strange to imagine people could be such explicit with each other, so physical. It was no longer the way, everything was through computers now except for the odd occasion when it was necessary.

But were they all history books, or were they like the fantasy games? People making it up for entertainment? No one was sure. We were still decoding the categories they had been put in and their true meaning.

But in the meantime, I was the first to open many of them; I was becoming revered for my understanding. Soon I would be like the game coders and able to make an impact on our society.
The resistance might claim that there was nothing of value here, but I begged to differ, they just wanted to keep the number one spot. We were on the verge of a revolution – an academic revolution, one that would see the game coders toppled from their top ranking.