This week's prompt was difficult to trace, only found it in four places, two of which were twitter. I could only find it on someone called JC Music's facebook page. I assume they created it. The beach picture is a stock photo, so the guitar has been photoshoped in.

As today is the anniversary of Prince's death, (of whom I was/am a huge fan) so this piece has been influenced by him. It is afterall a guitar. 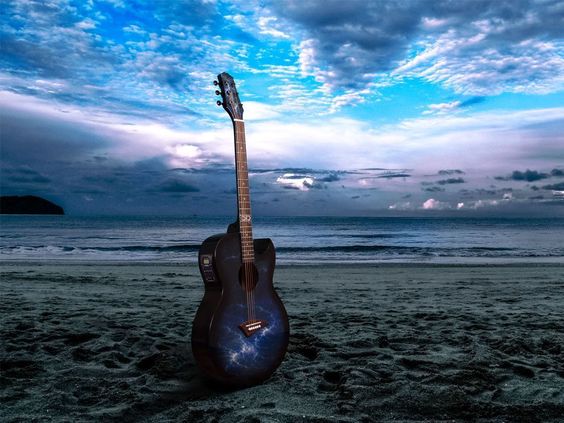 Magical Guitar
There weren’t many that could wield the guitar. There was a certain energy to music and this guitar enhanced it three fold. It was different. It had been forged out of a metal no one could identify. He only smiled when they tried. There was no explanation. It was not of this world, much like him.

His success here in this time and on this planet was considered exceptional. He was adored and worshipped, but he had little interest in any of that. He was only interested in one thing, the guitar, and playing it at every opportunity.

When he played the world swooned and so did he. It had a certain pitch than drew them all to him. Their energy fed the guitar, which in turn fed him. To him the sound expressed every emotion he had ever felt, and released them in ways that surpassed words. It was pure and deep and beyond anything he had ever known.

To him it became an addiction and he burned brightly with it, so brightly that it burned him out. Although his soul longed for the sound, it took its toll on his body, which wore down fast than normal. When he died, the legacy of the sound remained but it never hit the same pitch without his touch, and those that had been drawn to it and shone in its light felt something missing from their soul.