This week's picture prompt remains uncredited. The weirdest thing happened when I looked it up on Google Image Search and TinEye - no matches of it anywhere! I saved this down from Tweetdeck - maybe the person removed it, sadly I  no longer know who did share it. So if you happen to know, let me know.

And this one gives me another Tricky story. She's so ready for her next two books to be written and giving me some great snippets!  (Last Tricky Tale was on Week 195) 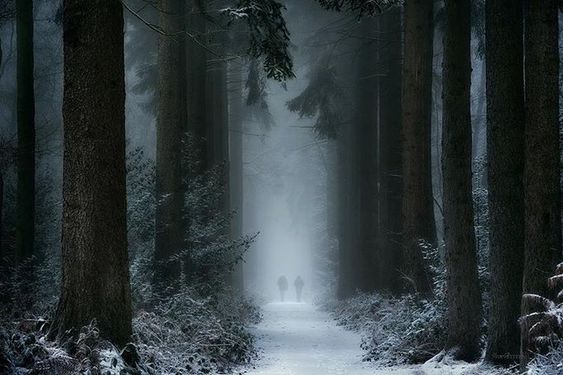 Tricky stayed in her position and watched them walk by. She listened to their boots crunching in the snow until it faded, then she moved out of her camouflaged spot and leaned round a tree trunk to watch them. She knew one of them but the other had yet to be named. The tree gave a slight rustle and showered her in snowflakes.

‘I know, deary, they’re trouble. It’s why I’m watching them. Did you hear what they were discussing? That’s yours truly.’ Tricky grinned. ‘Oh yes, I’m on their minds alright, and they should be worried about it.’

She stepped back into the undergrowth. She wasn’t stupid enough to walk in the open thoroughfare through the forest, not just because of the sound of the snow, or leaving tracks, but because if they were talking about her, they were having her watched – even out here. Tricky was cleverer than that.

She took a breath and inhaled, bringing up energy from the ground and trees around her. It meant she could glide through the forest unheard at twice the speed and get ahead of them again.

She found another spot, a bit higher up than the path, but it gave her a bird’s eye view. She blew out in a line towards them to create a funnel of sound so she could hear them at this distance.

‘It’s why she’s named Tricky. But that’s not her real name, surely?’

The man stopped for a second. ‘Don’t tell me you don’t know who she is? Patricia Hayek! I’m paying you good money to be informed, and keep an eye on her movements. I know she’s out here in Ferristan, but none of you seem to have been able to keep her in your sights!’

Tricky snickered to herself. Serves him right thinking he could.

‘I’m sorry Mr Stanislav, but she uses magical means to stay hidden. We haven’t worked out how yet.’

‘What do you mean you haven’t worked out how? By the same means as our friend, he should be able to fill you in.’

‘He said they use different means.’

‘Then maybe he needs to do the tracking for me!’

‘But he said he couldn’t, she’d know then, see, that it was him, and blow his cover.’

Tricky’s eyes were wide and a grin spread across her face. Oh my! What a juicy piece of gossip. There was only one person that could be, but she needed to get evidence, some kind of proof, something more tangible than hearsay.

‘I can’t have that woman meddling, do you hear?’ Then he glanced round the trees. ‘Do you hear woman? I will see the end of you!’

Tricky laughed aloud this time, startling them both. ‘Oh deary, you first!’ she called.

And with that she drew a circle in the air and jump through, closing it behind her. He’d have his trackers out faster than she could say slimy cockswindler.