This week's picture prompt was taken by French photographer Florence Caplain. She calls it, High Tech.

It's a Tricky snippet this week exploring a scene I've had on my mind. I did write more of it, but it gives too much away so I've cut it short. Last Tricky tale was Week 230. 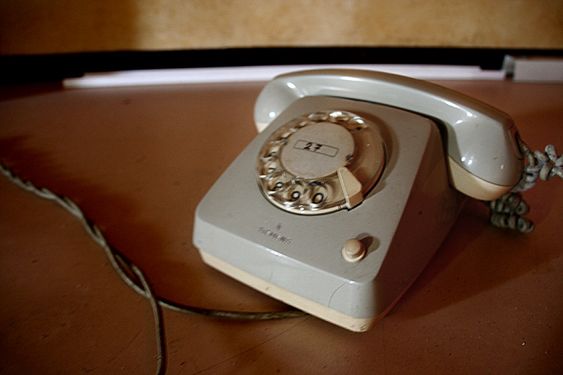 Bringing News
Tricky had seen one before, but never a working one. It was odd, almost unnatural seeing people talk into a piece of plastic and hear a voice back.

She wondered how they had got it working, and there was some technical explanation, but she didn’t have the brain for all that nonsense; trees, energy and time were her thing, this telephone was not in any of those realms.

The weird dial was funny; you hand to turn it and it turned back itself, bit like a clock in some ways but its numbers didn’t make sense – not to Tricky. She sniffed. They were well shot of such things she reckoned. It had only led to distraction and then.

Why Tumelo wanted to be messing with them again she had no idea, and it wasn’t her business, but it felt strange sitting here listening to him speaking to someone on the other side of the city.

The city of Chestwick bustled in a way that made Tricky feel uncomfortable. They were all rushing about doing things and being somewhere and no one took the time to speak to one another. It was odd. It got busy in Clancy and also in Ballford when she lived there, but they all knew each other. Here there was at least triple the population, so they didn’t.

It wasn’t her first time here. She’d been a few times – even once with her father before he’d tried that stupid trick with the heat-ball that had backfired, quite literally. She’d last been here after her mother’s death to speak to Tumelo about what she had witnessed that night. It had been an emotional visit and she hadn’t really taken in much of her surroundings, just wanting their meeting to be over.

And she was here again, wanting the same. The news she carried was risky. Tricky could do risky if it was just herself, but it wasn’t, it was all of them. She hadn’t even begun to tell Tumelo yet. He’d only called her in moments before that old fangled telephone had made a strange noise, like the tinkling of bells, and he’d picked up the top part and started talking into it.

She was trying to hold her nerve, but Tricky wasn’t one for patience. If he didn’t hurry up she’d take the damn thing off him and slam it down. She really needed to get this news out, like a meal that had turned sour in your stomach and pushing to get out at the other end.

Tricky shuffled in her chair for the fourth time and coughed slightly. This time it worked; he glanced up while he was speaking and looked at her with those soft deep eyes of his, a question in them. She held his gaze. It wasn’t hard; it was so inviting and warm you just wanted to fall into it. What was it about him and his family and their ability to beguile you with a look alone? Even his wife could do it; Tricky had been utterly enraptured by her when she’d greeted Tricky in the hall and brought her through to The Baron’s office. Their entire family was gorgeous. Tricky could fancy them all.

Returning Tumelo’s look seemed to work. He wrapped up his conversation and put the earpiece back in its cradle, turning his full attention to her.

‘Sorry Tricky, I get a bit carried away on that thing, it has made life so much easier.’

‘I’m sure they said that about lots of things before the shift.’

Tumelo nodded his acknowledgement of her meaning. ‘No doubt they did. So what news? I assume it’s something important for you to come all this way, rather than communicate via other means.’

‘Yes, it’s very important, and you’re not going to like it.’