This week's picture prompt is another picture from Florence Caplain. She takes really interesting pictures. She calls this one 'caught'.

I wanted to write something much darker than I have, cuz this picture deserves it, but what came out was more subtle. 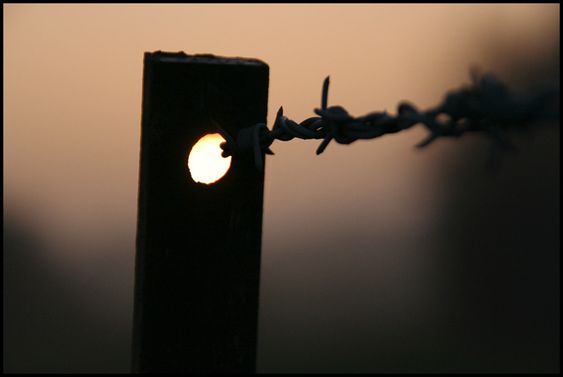 She liked the view at sunset, the way the light fell across the land and coloured the underside of the clouds. She felt free when she looked at it, wide open, as though she could do anything and go anywhere. But she couldn’t.

Carly had come here believing she was starting a new life; joining a community; being part of something special. She’d visited so many times and everyone had been warm and welcoming, chatting to her and making her feel significant to them and their group. And then she’d arrived and that had all changed.

The silence had begun; ignoring her at social gatherings, only talking amongst themselves. They were civil to her, would pass the time of day, but nothing more. They would never drop by or invite her round, except to events where she was expected – oh and she was expected, in fact they were obligatory. If she didn’t show up they were insulted. It was always what suited them. Nothing was hers anymore – not even her own husband.

He would drop everything for anyone in the community, but when she needed his help or support he would dismiss her or tell her she was being dramatic. Like when their baby son was sick and she needed to work. Yes, she worked from home and could be there for him, but she still had a deadline and wasn’t able to keep getting up to tend to him every time he cried. But her husband had an event at one of the many community clubs he was involved in, and went out, telling her to call if she needed him.

And she did, but he didn’t respond to any of her calls or texts. When he did eventually respond, it was three hours later and only a quick message asking if she really needed him to come because it hadn’t finished yet. Again, when she tried to reply, by text or calling, he’d turned his phone off. He turned up just before midnight and she had to work until three in the morning to meet her deadline. He didn’t care. They came first.

There had been rows; there had been unpleasantness, and he’d made it clear she would never leave with their children if she chose to go. It didn’t help that there was nowhere to go to and no money to go with, so Carly had stayed and made the best of it.

She stood in the field at the back of their home, and looked at the fence that ran round it: the barbed wire, the wooden stakes it threaded through. This wasn’t just a fence to keep unwanted animals out, it was a fence keeping her in. She felt like a prisoner in her own life.