This week's photo was originally taken by Nucu on DeviantArt, a photographer in Romania. But since their original picture it has been altered and filtered, and spread far and wide on the internet. This is apparently on a beach in Greece - although personally it could be anywhere - including where I am in Holland. 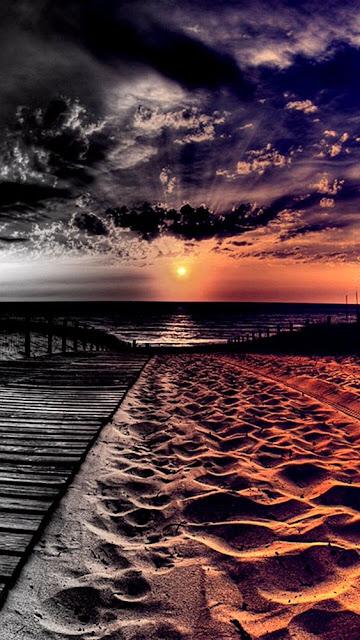 Dusk Dreams
Mandy sat shivering in the dusk light looking down at the beach and the sunset from the top of a sand dune. The last rays of sunlight displayed their magnificent beams as the sun sank into the ocean, getting lower every second.

Mandy had intended to sink lower too. She’d gone in and waded out past the break of the waves, until she was in over her head. Then she’d let herself fall to the bottom. It hadn’t been easy, she’d let the air out bit by bit to get her down onto the seabed. She’d used her arms to hold her there and waited until the last bubble was gone. The pressure had built up, and her arms had gone from rhythmic steadying to panic fluttering, but she hadn’t been able to open her mouth. She just couldn’t talk her body into doing it. She’d rushed back up to the surface and taken in lungfuls of life giving air.

She’d swum back to shore and flopped down onto the empty beach. And it was so very empty as all beaches were now.

She wondered how many others there were like her; alone and alive. There had to be others scattered about, unable to bring their lives to an end despite there being nothing left to live for – quite literally: no work, no people, no food, no nothing. It had all stopped. With nobody to run anything it would of course. They were all gone. Mandy didn’t know where. One day everyone was there and everything was normal, the next she’d woken to deserted streets. There was only static on the radio and on the television. She had no idea what had happened

She’d driven out of the city and found the same in every town she’d passed through. At first it was a delight, the world her oyster, everything she ever wanted at her fingertips. But now, months on, it was a nightmare, a place of rotting food and starving pets. The beaches were the only place free from it.

And so here she was recovering from another failed attempt to end her existence, maybe the last person to witness a sunset, unsure what to do next.