This week's photo prompt is a sculpture by Hasan Novorozi. Ther are a variety of angles on different sites of this, but I like the one that Hasan has on his own FB page. It brings it alive. He makes some incredible things. 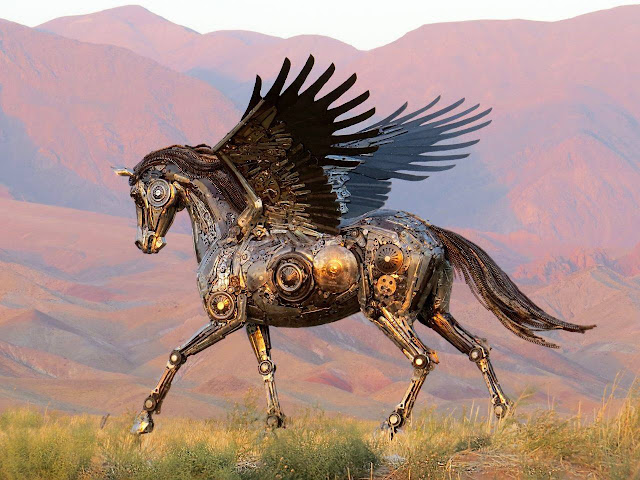 He trotted along the ground, feeling the wind beneath his wings. He could see the others flying overhead, and hear them jeering at him.

‘You’ll never make it up here, Glint, you’re way too heavy. You’ll never be able to glide like we do!’

He watched them all swirl and loop, galloping in the air with such ease. His owner, and maker, had never imagined he’d be able to fly, even though he’d given Glint perfect working wings.

Glint was determined he would. It wasn’t fair to see all the real flying horses enjoy themselves up there, leaving him here alone on the ground, an outcast. He might be made of cogs and metal, but the electrical unit kept him very much alive.

The wind had started to pick up, gale force winds had been forecast and they might just give him the opportunity to get wind borne.

He cantered to the edge of the field he was in and easily jumped the low fence. He knew there was a cliff edge close by; his master had ridden him there many times.

He picked up speed and galloped head long at it – it was his only chance. As he approached he opened his wings out as far as he could and moved them up and down in anticipation.

He leapt, flapping as fast as he could. For a moment he hung there and he thought all was lost; he was going to take a nose dive and end up as a pile of scrap metal at the bottom of the gully. But a gust caught him and picked up his wings and he felt himself lift up, higher and higher.

The other horses had seen him go and came to join him. They glided alongside him, no longer jeering but encouraging.

‘Wow, Glint, you look great! Come and loop the loop with us!’

But when Glint banked round, his wing tip caught the underbelly of one of the other horses and ripped it wide open; blood and guts fell from the sky, and the horse along with it. There were screams and screeches as the others rushed after their friend, and Glint was left alone in the sky, mortified and guilt ridden.

When he landed back down on the pasture, he trotted over to the cliff edge and watched the other horses mourn their friend. He hadn’t meant to hurt anyone; he’d only wanted to join in.

He tossed his head up in the air and let out a deafening neigh that echoed off the cavern walls, causing everyone at the bottom to look up at him. Then he backed up, and, in full gallop, went over the edge of the cliff. This time he didn’t open his wings or catch any of the wind currents, he let the weight of his metal body hurl him down into the ground at the bottom.

What would be the point of life of being left alone and shunned as a murderer?