This week's photo is another by Florence Caplain, a french photographer. She says about it: 'I would be a princess and I would sail on the emerald on a prodigious throne.'

My depiction is a little bit darker ... 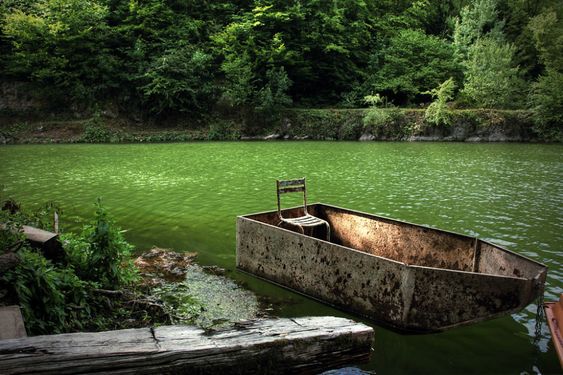 The Chair
They shoved her along the jetty. Up to this point she thought it was some kind of sick joke, an empty threat the elders used, but there it was in the river waiting for her: the chair.

It had become legend; something people talked about. Someone always knew of someone who had been put in it, but no one Frances knew and no one who still lived in their community. Were they dead? No one knew. Was it survivable? No one knew. Where did it go? No one seemed to know that either. She’d thought it had been fake right up until they’d come for her and dragged her through the town bound and gagged.

And why her? She wasn’t even sure about that either. Yet all the people seemed to know as they came to their doors and watched her taken, standing mute, no surprise registering on their faces.

She didn’t know the men pushing her forward to the strange metal boat the chair was fixed in. Where had they come from? They weren’t natives. Had they brought in outsiders especially to dispose of her? She supposed so.

‘Get in!’ One of them demanded as they came to the end of the landing.

She carefully lowered herself down, finding it hard with her arms tied behind her back, unable to balance easily. She almost fell at one point, but they at least stopped her from suffering that indignity as they grabbed her and swung her back towards the chair. She slumped down into it, straightening herself as best she could. Her hands grasping one of the rungs on the back of the seat to keep herself steady.

They untied them mooring rope and kicked the metal boat off from the jetty, not saying a word. The onlookers crowded along the shoreline but didn’t venture onto the walkway. The boat swayed a bit and drifted further out into the green water until it was caught by the current and started moving forward.

Frances began chewing down on the gag, tearing bits of the material with her teeth, twisting it round her tongue to pull at it and rip it apart. It took a long time, but she had plenty of that while she sailed along at walking pace. She rubbed a piece of the rope that bound her hands against the metal bars on the back of the chair, too, hoping it would at wear enough to break. But by the time she felt it loosen she was into unknown territory and the light of the day was dimming.

She shook her hands out, relieved to be free. Finally she had means to steer – although there were no oars. In fact the boat was devoid of anything.

She scooped some handfuls of water out of the river. It tasted different to the well water she was used to but was still refreshing, the gag having absorbed most of the moisture in her mouth.

At the tip of the boat were the mooring ropes, and she snatched them up hoping she might use them to guide the boat. If she could direct it to shore maybe she could get off and find shelter. But the ends were frayed and the length stopped where they met the water. Had something eaten them away?

The boat jostled and Frances lost balance, falling back into a sitting position in the bottom of the boat. Whatever was causing the movement escalated and she gripped the sides hoping the boat wouldn’t capsize.

It started moving forward faster and faster until she was sure she must be headed to a waterfall but instead it ran aground, hitting the shore so hard she was thrown up and out, landing on a tiny sand beach surrounded by dense forest.

Frances hadn’t seen sand before. She rubbed it between her fingers as she lay there, experiencing its strange gritty feel. Then she heard breathing behind her. It was ragged and gulping. She turned and couldn’t quite believe what she saw; a large dark green scaly creature, with a long tooth-filled jaw, crouched low to the ground.

Frances didn’t dare move, but there was rustling from the trees at the perimeter, and a man appeared.

‘Ah, Gorgan, they’ve finally sent us a new one. Excellent. Just when I was beginning to wonder if we were going to have to go and fetch one ourselves.’

He walked up to Frances’ head and smiled down at her. She smiled back, but a sweep of his foot wiped it away, along with her consciousness.